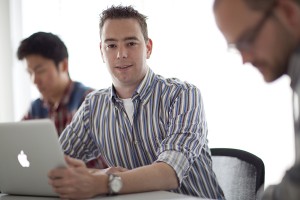 Pieter is with ICsense since 2005. He joined straight out of University (KU Leuven), having graduated with a master’s degree in science and electronics. His career with the company started as a junior analog designer. Pieter’s responsibilities have since grown to include a project leadership role from 2009. Then, in 2011, he was promoted to his current project manager role.

WHAT INSPIRED YOUR INTEREST IN IC DESIGN?

As a teenager I was fascinated by electronics which became a hobby. I wanted to understand how the consumer products around me worked. It’s what lead me to study science and electronics at University.

WHAT IS YOUR CURRENT DESIGN FOCUS?

A lot of my efforts revolve around the automotive industry. I have been working on an interesting sensor project that combines precision instrumentation (the detection and measurement of tiny signals) captured by a magnetic position sensor with high voltage components on a single device. It also has to operate in a hot and electrically noisy environment. It’s proven quite challenging.

WHY DID YOU CHOOSE ICSENSE?

Starting my career, I was quite selective about finding the right employer. I already had an internship with Philips prior to graduating which clarified my views. In 2005, ICsense was only just getting started and I was attracted by the young, flexible and dynamic culture. The idea of a small group of people starting a journey to build a company around a core analog competency appealed. I was also keen to start on some real design work and saw, in ICsense, an employer that was already building a strong identity around innovation. I thought ICsense would support my desire to learn and grow and I have not been disappointed.

WHAT STANDS OUT ABOUT ICSENSE AS AN EMPLOYER?

We’re always on the lookout for people with an intrinsic understanding of electronics but they need a creative bent as well. It’s really important to understand that team work is a key factor in our success and we rely on and practice clear communication. Despite that, there’s always room to learn. Above all, though, we want individuals to flourish. I am not sure you’ll find that combination of values elsewhere.

As a project manager, typical doesn’t really exist. My job forces me to have feet in several camps as I have multiple project teams to manage. My job is about giving project leaders the space to do their best job. Effectively, I create the room for execution to happen. I have to anticipate problems, remove road blocks and act as a go-between and fixer. It’s a lot like juggling and it’s very fulfilling.

Apply for a job